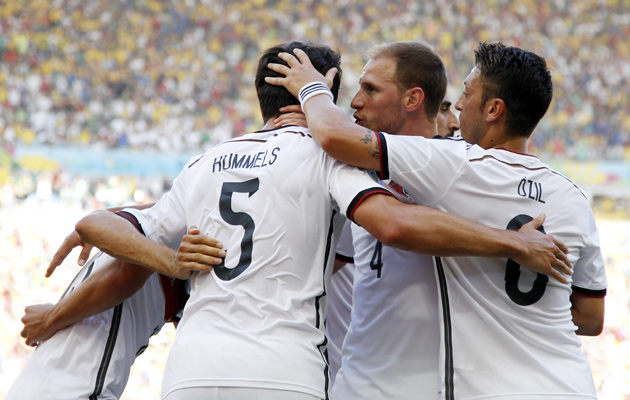 Hummels, restored to the starting line-up after illness forced him to sit out Germany’s second-round victory over Algeria, rose above Raphael Varene to head the free-kick from Toni Kroos past French keeper Hugo Lloris.

France had their chances in the first half, with Germany’s midfield giving possession away in uncharacteristic style. Karim Benzema should have hit the target in the eighth minute, but sidefooted his volley wide, and Manuel Neuer saved brilliantly from Mathieu Valbuena. But Germany’s midfield, with Sami Khedira restored alongside Bastian Schweinsteiger, gradually assumed control.

Despite chasing the equaliser in the second half, France appeared scared of being caught out by German counter-attacks. Their midfield lacked ideas and movement but coach Didier Deschamps left it late with his substitutions. Laurent Koscielny replaced injured defender Mamadou Sakho in the 72nd minute and Yohan Cabaye appeared for Loic Remy a minute later. The last change, Olivier Giroud for Valbuena, was made with only five minutes remaining. France’s best chance came in injury time when Benzema’s shot was palmed away by Neuer.

Germany had opportunities to extend their lead in the closing minutes. Lloris saved with his feet to clear a shot from substitute Andre Schurrle after Thomas Muller had fluffed his opportunity with an airshot. And then Schurrle’s fierce goalbound shot was blocked by Varane.

Germany now face Brazil or Colombia in Tuesday’s semi-final in Sao Paulo. France head home after failing to find an extra gear when the pressure was on.

Key moment: Germany’s goal in the 13th minute. Germany survived early pressure from France to take an early lead, and were rarely troubled from then on.

Man of the match: Mats Hummels was Germany’s hero at both ends of the pitch. As well as scoring Germany’s goal, he made three crucial interceptions to block French attacks.

Talking point: For all the pre-tournament talk about Germany’s flirtation with tiki-taka and false nines, the nationalmannschaft went back to basics, with Philipp Lahm at full-back, Miroslav Klose at centre-forward and Bastian Schweinsteiger and Sami Khedira restored to central midfield. The winning goal was a good old-fashioned header from a free-kick.