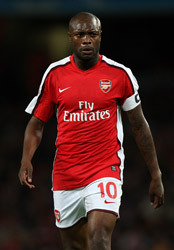 Arsene Wenger has hinted he could recall William Gallas to his starting Arsenal line-up for tomorrow night’s Champions League fixture with Dynamo Kyiv.

The manager stripped Gallas of the captaincy and dropped him from the team that lost 3-0 to Manchester City in the Premier League on Saturday, after his criticism of his young team-mates.

Gallas appears to have a problem with the young generation of players and in particular Dutch striker Robin van Persie. Gallas is understood to have addressed the squad last Friday, by which time he was aware of his omission. However, he was unable to bring himself to apologise to his team-mates.

If he does return against Dynamo, it is unlikely he would do so as captain. Wenger has Cesc Fábregas available again after his suspension at City and the Spaniard is seen as the most likely stand-in leader.

“Cesc Fábregas will be available for Tuesday and maybe Gallas,” said Wenger. “The most important thing for us is to keep strong, united, focused and not panic. We haven’t lost our football in three days so therefore, let’s go and win our next game. That is difficult, I don’t deny that, but there’s no need to be desperate as well.”

Despite Wenger’s disappointment at Gallas’ comments last week, the manager has claimed Gallas still has a future at the club.

“Of course he has a future at the club,” said Wenger. “It just doesn’t help to talk about it. Nothing disturbed us before the [City] game. I believe it was a flattering victory for them, and we have had worse weeks than this.”

There remains the possibility of a return to France should Gallas be unable to regain favour at the Emirates. Paris St-Germain, with whom he has long been linked, are believed to be willing to sign the player on a six-month loan deal once the transfer window opens in January.

Gallas was born in the suburbs of the French capital and has made no secret of his desire to play for his hometown club.