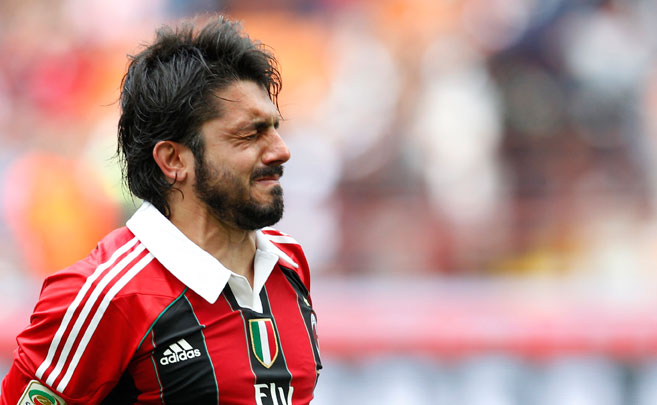 Gennaro Gatusso under investigation for match-fixing

Former Milan and Italy midfielder Gennaro Gattuso has been placed under investigation for match-fixing and four more people were arrested in an early morning police raid.

Cremona prosecutor Roberto Di Martino, who has been leading the Last Bet operation for three years, told The Associated Press that Gattuso and retired Milan and Lazio player Cristian Brocchi were allegedly part of a ring that fixed Serie A and other Italian matches at the end of the 2010-11 season.

Gattuso and Brocchi face charges of criminal conspiracy and sports fraud, according to the ANSA news agency.

”Gattuso and Brocchi were connected to the case by the use of phone taps,” said Di Martino, who could not confirm the exact charges.

Gattuso, who was a key member of the Italy squad that won the 2006 World Cup, was fired as Palermo coach in September. Brocchi is currently coaching in Milan’s youth program.

Gattuso’s agent Andrea D’Amico reacted to news of the investigation in a brief interview with ANSA.

“I spoke to Rino and he’s (stunned),” D’Amico said. “Right now it’s important not to draw any conclusions and rather wait and see why these names are coming out.”

There has been speculation in Italy that one match under investigation is the goalless draw between Milan and Lazio, which took place in February 2011.