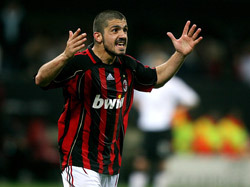 Arsenal head to the Riverside this Saturday lunchtime knowing that they’ve only beaten Boro once in their last six head-to-heads.

Gennaro Gattuso says he will will use his renowned battling qualities during his recovery from a knee ligament injury.

The Italy World Cup winner, who tore cruciate ligaments in his right knee in Sunday’s 1-0 win over Catania, will have an operation on December 19 and could be out for the rest of the season.

“I will take it as a new challenge, a new battle to win. I have won many battles and I will also win this one,” he told Italian television.

“I am really upset at what’s happened but I think I will again be able to cut the recovery time. I always say that in life there are worse things, there is no need to despair.”

Gattuso’s team mate, Andrei Shevchenko, admitted that the loss of the tenacious midfielder was a big blow to Milan.

“This injury was a big surprise for us. On Sunday he finished the game and he was fundamentally important for us, as always,” Shevchenko told the club’s in-house TV channel. “He is a leader for us. We’ll miss him a lot.”

Arsenal head to the Riverside this Saturday lunchtime knowing that they’ve only beaten Boro once in their last six head-to-heads.