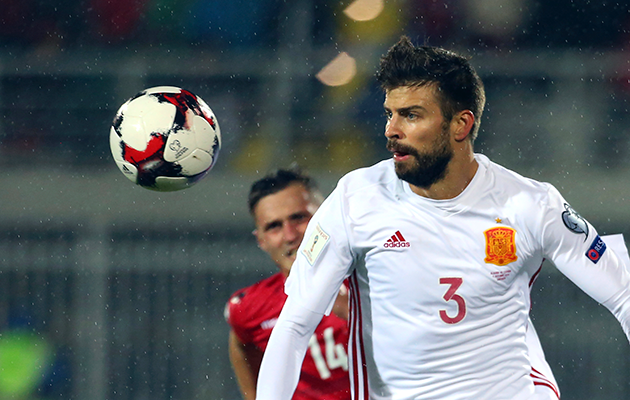 Gerard Piqué has confirmed that the 2018 World Cup in Russia would be his final tournament with Spain because he feels there are certain elements that don’t want him in the national team.

The Barcelona defender spoke after Spain’s 2-0 win at Albania on Sunday in European qualifying for the World Cup.

“I always give everything I have on the field, but there are people who think it’s better if I’m not here,” Piqué said. “After Russia, a stage will have ended for me.”

The player is frequently booed by many Spaniards because of his pro-Catalonia stance. He has appeared at pro-independence rallies on a number of occasions and has made no secret of his desire to see the region secede from Spain.

Piqué caused controversy during Sunday’s match by cutting the sleeves off his kit instead of changing into the short sleeves which have the colours of the Spanish flag. He claimed the long sleeves were bothering him.

He was backed up by the Spanish Football Federation who produced a photo of Sergio Ramos’ long sleeved shirt to show that it it did not contain the colours of the Spanish flag.

Piqué insisted his decision to retire had already been made before this latest controversy.

“It’s not a ‘heat of the moment’ decision, I’ve given a lot of thought to this,” said the 29-year-old. “It’s not because of what happened today, it’s because I always give my best on the field and, although there are some people who have thanked me, some don’t think it’s OK for me to be here.”

The defender added that he had won everything there was to win and wanted to make way for younger players. Pique, 29, has played 84 times for Spain.

“You need to give them some space,” he said. “I’ll be 31, I’ve won everything with the national team. I’ll try to play my 100th game with the team, and I want to win the World Cup again, which is the most important thing.”

“Life goes on,” he said. “I still want to be with Barcelona for several years.”