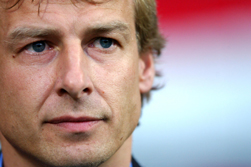 Former striker Jurgen Klinsmann has been offered a two-year contract to coach the German national team, the German Football Association (DFB) have confirmed.

Further details of the contract will be available in the next few days, said DFB spokesman Harald Stenger.

Klinsmann, who ended his playing career in 1998 following Germany’s exit from the 1998 World Cup, has been living in the United States in recent years. The highlight of his career came when he helped Germany to World Cup glory in 1990.

According to reports in Germany, Klinsmann will be appointed team coach, Osieck assistant coach and Bierhoff team manager.

Klinsmann’s appointment comes after the resignation of Rudi Voller who presided over Germany’s disappointing Euro 2004 campaign.

Klinsmann said: “My role should be as team boss. This post is an honour for me.”