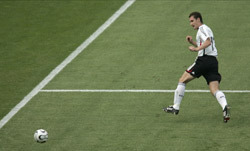 Germany cruised to a 3-0 win over a weakened Ecuador side to top Group A and earn a knockout tie against the runners-up of Group B on Saturday.

The result was never in doubt from the moment Miroslav Klose opened the scoring for the hosts, and further goals from Klose, and Lukas Podolski, ensured a comfortable afternoon for Jurgen Klinsmann’s side.

The real work begins now for Germany. They have qualified comfortably, but that always looked likely in what appeared the easiest of all the groups. Encouragingly though for Klinsmann, his team, which had always looked capable of scoring goals, now looks much more secure defensively. Only time will tell if their new-found self-belief is justified or misplaced.

Ecuador striker Agustin Delgado was one of five players rested as the South Americans looked ahead to round two.

Germany though were almost at full strength as Klinsmann looked for the win that would ensure his team would top the group. Knee injury victim Christoph Metzelde was the only absentee, replaced by Robert Huth. Skipper Michael Ballack was risked, even though he was a yellow card away from missing the next game.

It took just three minutes for Germany to take the lead. Klose, who was unmarked on the edge of the six-yard box, slammed home a low drive after Ecuador failed to clear a corner.

Klose went close again when he threw himself at Philipp Lahm’s cross but just failed to connect with his head.

Ecuador were struggling to get into the game but given that they had already qualified for the knockout stages, a degree of indifference on their part was perhaps understandable. Maybe the second round was the limit of their ambitions for this tournament, or perhaps they were simply not concerned by the prospect of meeting the winners of Group B.

Germany had a good opportunity to double their lead when Schweinsteiger burst through, but he was denied by Mora. The rebound fell to Ballack who aimed to chip from long range but his effort sailed over the bar.

Germany received a scare shortly before half-time when Lehmann fell heavily after clearing from Kaviedes. The match was stopped to allow the keeper to receive treatment, but happily for the Arsenal man, he was soon back in the fray.

Klose added a second on the stroke of half-time when he was put through on goal by a clever dinked chip from Ballack. Klose sidestepped the onrushing Mora and slotted the ball into the empty net.

Germany were in control as the half-time whistle sounded, although we shall have to wait and see whether this is a team capable of mounting a genuine challenge for the title, or if they have been flattered by the poor quality of their opponents in Group A.

Podolski, who had not been enjoying the best of tournaments, continued to misfire. He had two good opportunities in the opening minutes of the second half, but on both occasions, the chance was squandered.

Shortly afterwards the striker eventually came good following a wonderful sweeping move by the hosts. Schweinsteiger broke from midfield, before finding Schneider on the right and the Bayern Leverkusen winger looked up before delivering a perfect cross for Podolski to slide home.

Podolski almost made it two in two minutes when he was collected Klose’s pass, but this time his finishing lacked conviction and Mora made a comfortable save.

Germany were starting to look like an impressive unit and backed by a passionate vocal home crowd, they look like one of the teams to avoid in the knockout stages.

With both coaches making multiple substitutions midway through the second half, it was clear that their thoughts had now turned to the knockout stages and the remainder of the match resembled a training game.

Ballack raised the crowd from their torpor when he forced a good save from Mora, but otherwise, Germany were content to pass the ball around and expend as little energy as possible.