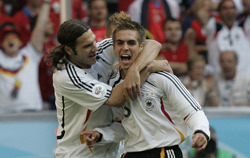 Germany opened their 2006 World Cup campaign with a 4-2 win over Cotsa Rica.

Impressive going forward, Germany will have concerned their coach Jurgen Klinsmann with a couple of defensive lapses which kept Costa Rica in the game.

Germany started the competition without captain Michael Ballack, despite his assertion on Thursday that he was fit to play.

The first shot of the tournament came after three minutes from Torsten Frings whose swerving effort from distance just cleared the bar.

Two minutes later Germany went ahead through a stunning goal from Philip Lahm. The full back cut inside from the left wing and curled an unstoppable right-footed shot from the edge of the penalty area past the helpless Porras.

The goal seemed to infuse the German team with confidence and they began to push forward in numbers.

They had a chance to double their lead on ten minutes through Bernd Schneider but the winger fired over from close range.

It was to prove a costly miss, as two minutes later, veteran striker Paolo Wanchope collected Ronald Gomez‘s defence–splitting pass, advanced on goal, and calmly slotted the ball past Lehmann to level the scores. The goal sparked wild celebrations among the small band of Costa Rican supporters while the majority of the crowd looked on in stunned disbelief.

However, the majority of the stadium did not have to wait too long to resume their revelry as Germany regained the lead on 17 minutes.

Miroslav Klose, celebrating his 28th birthday today, fired in from close range after excellent work from the energetic Schneider. The Bayer Leverkusen winger cleverly created space on the right flank before crossing for Schweinsteiger whose cross-shot was prodded in at the far post by the alert Klose.

The World Cup hosts continued to take the game to Costa Rica with Schweinsteiger in particular looking threatening on the left flank. Danny Fonseca, who was struggling to contain the Bayern Munich midfielder, picked up the first booking of the tournament for a clumsy challenge.

Germany began the second half as they ended the first with Lukas Podolski firing just over with a long range effort just after the interval.

However, it was Costa Rica who came closest to scoring when Fonseca was left unmarked from a Centeno corner, but he sliced his header wide.

On 61 minutes Germany extended their lead through Klose. Lahm who was enjoying the freedom of the left wing was again found in space and his cross was met at the far post by a Klose header. Although keeper Porras saved well at his near post, the striker almost casually lifted the rebound into the roof of the net.

Costa Rica refused to accept defeat and on 73 minutes Paolo Wanchope pulled a goal back after he was put through by a delightful pass from Centeno. Wanchope finished well with a flick of his right boot, but the ease with which the goal was created does not bode well for Germany’s hopes of winning the trophy on home soil.

Germany’s two goal lead was restored by Torsten Frings who fired home a stunning shot from 30 yards after being set up by Schweinsteiger. The keeper had no chance as the new lightweight ball swerved towards the far post.