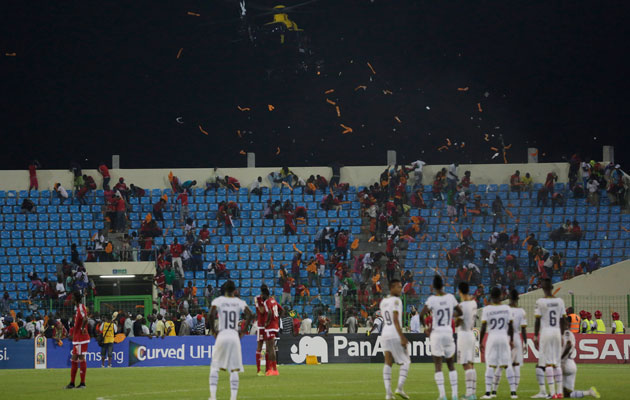 Ghana have demanded action against the African Cup of Nations hosts Equatorial Guinea after visiting supporters were attacked by home fans during Thursday’s semi-final between the two countries.

“It’s a pity that this dark cloud overshadows our success and we really need to see some stiff action taken by the Confederation of African Football,” said Kwesi Nyantakyi, president of the Ghana Football Association.

CAF will meet on Friday to discuss the incident, amid calls for the third-placed match bewteen the hosts and DR Congo to be played behind closed doors.

Some 500 Ghanaians had flown in to watch their team and were placed in a section on the side of the stadium, away from the rest of the 15,000-capacity crowd at the Nuevo Estadio de Malabo.

The game was halted again after 82 minutes when spectators spilled on to the pitch, and did not resume for another 40 minutes when the ground was largely empty.

With the Ghana fans pinned in one corner by the home supporters, order was eventually restored when a police helicopter swooped above the crowd and managed to disperse the majority of the Equatorial Guinea supporters.

“It’s now like a war zone,” the Ghana Football Association (GFA) tweeted, claiming “barbaric acts of vandalism” while its president told the BBC it was lucky no-one was killed.

“We are lucky that we haven’t lost any lives, though people have sustained various degrees of injuries arising from objects thrown at them,” Nyantakyi told BBC World Service.

The Ghanaians were then held back at the stadium for several hours while home supporters rioted outside the stadium.