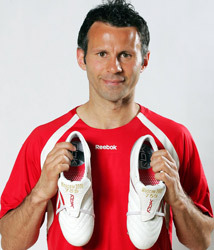 Ryan Giggs has signed a one-year contract extension which will keep him at Manchester United until June 2010.

The deal will extend the 35-year-old Welsh winger’s United career to just a few months short of his 37th birthday.

“I feel fit and I’m enjoying my football more than ever,” Giggs told www.manutd.com.

“This is an exciting young team and the spirit is great in the dressing room. I want to be a part of that and achieve even more success.”

United manager Alex Ferguson described Giggs as an inspiration to any young player.

“His lifestyle, the way he looks after himself, his desire to always want to win is a credit to him and also an inspiration to any young kid who wants to become a footballer,” Ferguson said.

“He is like a young boy in the way that he plays and, although he wants to play every game, he understands that by using his experience when it matters is a benefit to him and the team.”

Giggs has played in all 10 of United’s Premier-League winning campaigns, has won the FA Cup four times, the League Cup twice and has two Champions League winners’ medals.

In last year’s Champions League final he surpassed Bobby Charlton’s club record of 758 appearances and he is on course to reach 800 by the end of the season.