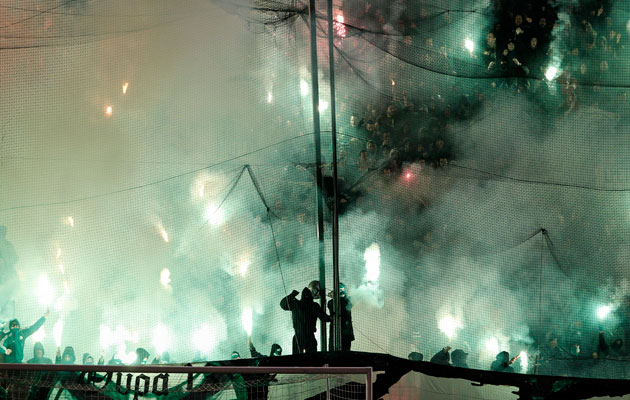 Greece’s professional football leagues have been suspended indefinitely in a concerted effort to crack down on crowd violence.

The move follows a pitch invasion at the end of the Athens derby last weekend and a Super League board meeting which ended in a brawl on Tuesday, with Greece’s recently elected Syriza government looking to aiming to stamp out crowd violence.

Organisers of the Greek Super League say an executive meeting was broken up after officials from rivals Olympiakos and Panathinaikos were involved in a brawl.

“We have a new government who are looking to bring this subject up for discussion and implement state laws related to it.”

Greece’s sports minister, Stavros Kontonis, met the prime minister, Alexis Tsipras, on Wednesday to discuss the matter and held meetings with Borovilos. At the moment there is no deadline for a resumption of football.

“The government wants games to start again as soon as possible, but for that they want to see immediate reactions from all of us,” Borovilos said.

“There will be further discussions between ourselves, the board of the Hellenic Football Federation and the Football League where we will see how we can build legislative frameworks and implement security measures to ensure football is safe.”

It is the third time this season that professional football in Greece has been closed down. Matches were halted for one week last September following the death of a fan after violent clashes at a third division match between Ethnikos Piraeus and Irodotos.

The authorities also suspended games last November after Christoforos Zografos, the assistant director of the central refereeing committee, was taken to hospital after he had been assaulted by unknown fans.

Stavros Kontonis, the deputy minister for sport, previously told private Skai television that the league would not start next season unless all 18 clubs introduce smart-card ticketing and security camera systems at matches.