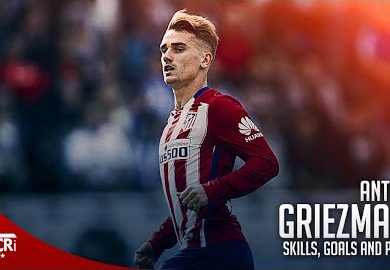 Antoine Griezmann has had a tremendous year at Atletico Madrid, the French superstar in the making has been prolific in front of goal this season and has forged a great understanding with the reborn Fernando Torres. However Griezmann’s success is down to Diego Simeone.

Griezmann said in an interview with Goal that that Simeone has adjusted his position and has given him confidence to be lethal in front of goal.

“At the start of the season when I said I wanted to be among the best [was a defining moment]. I know that it takes hard work every day in training and then in the match. I do that and it works for me – I hope to continue like that and do not want to stop here.

“I want to increase the level of my game, with goals and also other stats.

“He [Simeone] taught me a lot. He gave me confidence. I know he has great confidence in me so I try to deliver for him on the pitch.”

Ahead of his side’s clash Champions League final clash with Real Madrid – Griezmann is relishing the prospect of facing Los Blancos in what is anticipated to be a fierce clash.

“It will be a big game, a good show for both the players and for the fans and we will try to do everything to win,” he added.

“It’s a big derby, let’s say PSG versus Marseille [when comparing it to the French league]. There’s a lot of noise around it, people are waiting for this match and the fans are fully behind us. Even before the season starts, the fans look at the dates for the Madrid derbies, they all want to be there, they’re big games.”

And if Atletico win, Griezmann will want some downtime before turning his attentions with France where he will be expected to be his countries talisman.

“I hope we win. If that’s the case, I will ask for two days to celebrate with the team and then return to France with the desire to play and win for the team [at Euro 2016].”