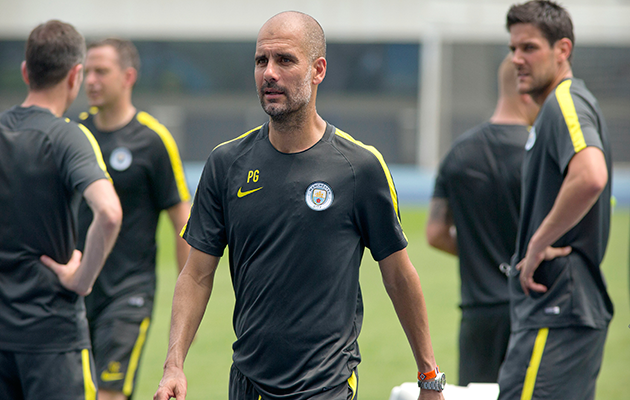 Guardiola is carefully monitoring players’ diets, with junk food such as high-calorie fruit juices, pizza and processed foods all banned.

Defender Gael Clichy revealed that anyone who fails to meet Guardiola’s requirements cannot work with the first-team squad until they are the right weight.

Compatriot Samir Nasri is one of those Guardiola has told to lose weight before he can rejoin his team-mates.

“You often hear managers say being healthy is really important,” said Clichy. “With him, if you’re weight is too high, you’re not training with the team. That’s the first thing.

“You can hear it a lot but, for my part, it’s the first time any manager has really done it. So we have a few players who are not training with the team yet. You have to know that if your weight is 60 kilos and you are on 70 kilos, then you cannot play football because you’re going to get injured and get your team in trouble. That’s important.

“He cut out some juice and, of course, pizza and all the heavy food is not allowed. Some people think that’s normal but, in truth, it’s not always like this. I know because I’ve been playing football for a long time. It’s really refreshing and very exciting.

The France full-back, 31 on Tuesday, has been hugely impressed by Guardiola, who reminds him of his former boss Arsene Wenger at Arsenal in the way that both men have ‘changed the way people see football’.

“I think he’s an ideal manager for any kind of player,” said Clichy, who is in Shenzhen with his team-mates for Thursday’s match against Borussia Dortmund.

“The goalkeeper needs to be better with his feet, the centre-backs are improving and the full-backs are important.

“He said if he could play 11 midfielders, he would play them. So I guess for a midfielder it’s unbelievable. And the strikers are going to score a lot of goals because we are going to create chances.

“I can even tell you that the assistant manager will improve. He’s the kind of guy that if you’re lucky to work with him during your career, he is someone you will remember for a long time because he’s truly impressive.

“He’s been a player also which makes a big difference. He’s young so I think he understands how football is going with the new generation coming though.

“He told us, ‘we’re going to be friends for all the pre-season and I know that when I name the starting XI for Sunderland some players are going to be upset — from that moment, I don’t know what to expect’.

“He just wants us to trust him, he wants to trust us, and I think it’s the right way to start a relationship.”