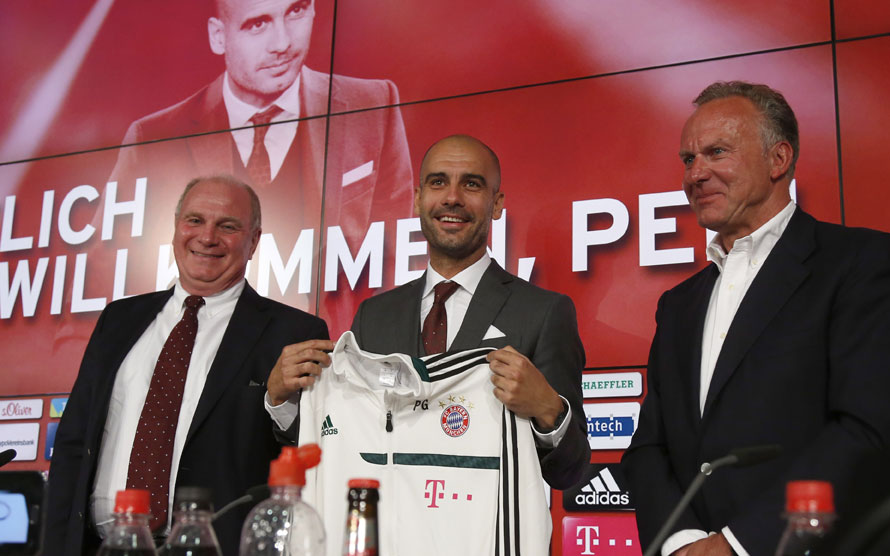 Bayern Munich chairman Karl-Heinz Rummenigge has hailed Pep Guardiola’s role in the club’s recent successes and believes the 43-year-old has helped increase the club’s popularity, too.

The former Barcelona coach replaced Jupp Heynckes (who presided over Bayern’s historic treble last season) at the start of the 2013-14 season, and Rummenigge is impressed with Guardiola’s work so far.

“This individual is a stroke of fortune for Bayern Munich as he combines quality and hard work in an unparalleled way,” Rummenigge told the official Bayern website.

“Everything that looks so effortless in public is the product of hard work from Monday to Friday. The intensity on the training ground, which I regularly see from the window of my office, is a marker.

“And we show the necessary respect to every opponent. I’ve never heard Pep utter a single arrogant word. That really pleases me and that struck me in his time at Barcelona.

“Our popularity has never been so high before. That’s also down to Pep.”

Bayern are unbeaten in the Bundesliga under Guardiola, with 62 points from 22 matches, an astonishing 19 points of their closest challengers, Bayer Leverkusen.

Although Guardiola will be hard pressed to emulate Heyncke’s historic achievements, the Spaniard has certainly introduced a new dimension to Bayern’s play this season. As can be seen in this compilation of some of their best bits from the current campaign.