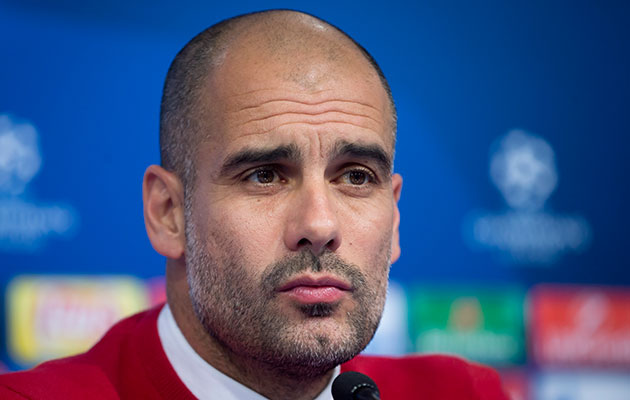 According to reports in Germany, Pep Guardiola has told Bayern Munich that he will not renew his contract with the club and will leave at the end of the season.

German magazine Kicker report he is definitely on his way amid growing speculation that he is set to replace Manuel Pellegrini at Manchester City.

The Spaniard, who is in the final year of his contract with the German champions, has been repeatedly linked with a move to the Etihad Stadium next season, though given their current travails, Manchester United and Chelsea have also been mentioned as possible destinations for a coach who remains much in demand.

Following Bayern’s 1-0 win over Darmstadt on Tuesday, Guardiola was quizzed about his future.

“Tonight I have no answer,” he said. “Next week there will be clarity.”

Last month the Bayern chairman, Karl-Heinz Rummenigge, admitted that the club had yet to begin negotiations over extending Guardiola’s stay but said talks were scheduled to take place after Bayern’s final match before the winter break against Hannover on Saturday.

“It is not planned to push back that date,” said Rummenigge.

“We have always said there will be a decision in 2015. I know that it’s late, just days before Christmas. But the talks will be held after the Hannover match, and we’ll then announce a decision.

“It always continues. There is no person in this world who can’t be replaced at some point. That’s the state of things. Players come, players go, and the same applies to coaches. They come and they go at one point.”

The Bayern captain, Philipp Lahm, spoke on behalf of the squad wwhen he said the players would like Guardiola to stay.

“The team’s position is clear, we enjoy working with our coach and we really, really want to keep doing so,” he said.

On Wednesday Spanish sports newspaper Marca it published a story claiming the 44-year-old had rejected Bayern’s offer of a new deal worth £14.5m a season and is expected to join City next season.

The presence of his former Barcelona collegaues chief executive, Ferran Soriano, and the director of football, Txiki Begiristain, at the Etihad, have strengthened the belief that Guardiola will be the next City manager.

The former Chelsea and Real Madrid manager Carlo Ancelotti is rumoured to be the favourite to take over at Bayern should Guardiola leave.

Guardiola has guided Bayern to successive Bundesliga titles, with the club five points clear of closest challengers Dortmund in this season’s standings. However, he has yet to emulate his predecessor at the Allianz Arena, Jupp Heynckes, in experiencing Champions League success.