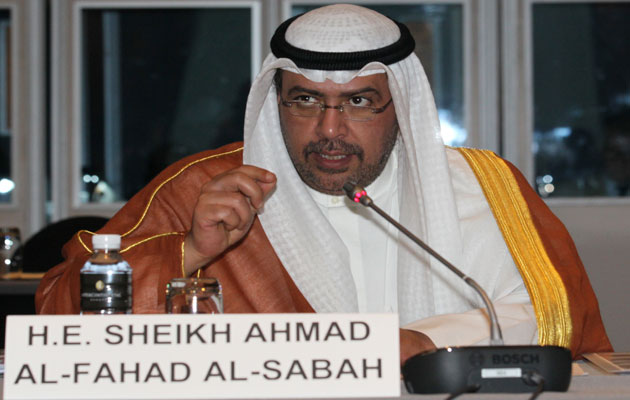 Olympic powerbroker Sheikh Ahmad Al-Fahad Al-Sabah wants to extend his command right across the world sporting spectrum by pursuing a place on the FIFA executive committee.

Sheikh Ahmad has been nominated for the forthcoming Asian confederation elections by his ‘home’ Kuwait Football Association for one of three AFC delegate slots on the FIFA executive committee.

His power of patronage, as president of two of the most powerful bodies within the Olympic movement, effectively guarantees him the votes and will spark fevered speculation all the way to FIFA HQ in Zurich about whether Sheikh Ahmad had ultimate designs on becoming, in 2019, the first Asian leader of world football.

Sheikh Ahmad is president of both the Association of National Olympic Committees and also of the Olympic Council of Asia. He was a key supporter of Thomas Bach’s campaign to win the IOC presidency in 2013 and also the decisive influence behind the successful bid of Bahraini Sheikh Salman Ebrahim bin Al Khalifa to win command of the AFC.

Indeed, Sheikh Ahmad’s latest move will raise speculation not only about his FIFA ambitions but about an interest, closer to home, in replacing Sheikh Salman.

The Bahraini’s AFC reign has been notable in a lack of progress on the wide reformist front culminating in the AFC’s recent decision to scrap the role of female vice-president, currently held by Australian Moya Dodd.

Assuming he is elected, Sheikh Ahmad’s dual role on the IOC and FIFA exco would become highly significant.

FIFA president Sepp Blatter is expected to win his own election in May but his own presence as football’s most powerful voice on the IOC would end in spring of next year when he hits the mandatory Olympic movement retirement age of 80.

Sheikh Ahmad would then be potentially the most important ‘football voice’ on the IOC since the other dual members are Issa Hayatou (the African football president) and Lydia Nsekera (Burundi) who carry nothing like the same weight.

The deadline for nominations to the AFC election is Saturday [February 28].

Other declared candidates for one of the three ‘ordinary’ AFC seats on the FIFA exco at the AFC congress which is to be held in Manama, Bahrain, on April 30 are:

Sheikh Ahmad, in confirming his candidacy, threw his weight unequivocally behind the 2022 World Cup in Qatar just two days after the controversy of the award was reignited by a recommendation from a FIFA task force for a winter staging of the finals.

He said: “For Asian football one of the highest priorities is to ensure that Qatar hosts the best possible FIFA World Cup in 2022. As the first FIFA World Cup hosted in the region I have no doubt that it will have a very strong legacy impact across Asia and the Middle East inspiring millions of young people to engage in sport.”

On a wider front he promised a candidacy which would emphasise the need and value for sport to provide a platform for worldwide social and political engagement.

Sheikh Fahad said: “Having been the OCA president for many years before becoming ANOC president, I understand the importance when transitioning into a global position of recognising and embracing different cultures for the benefit of all regions worldwide.

“I strongly believe in the power of sport to break down social barriers, foster greater gender and racial equality and unite the world for a better future.

“Football as the sport with the greatest reach in the world has limitless potential to promote these values and bring about social change.”