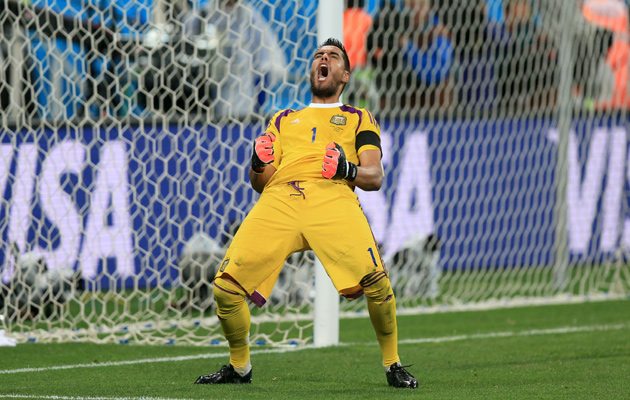 Romero had had little to do over the course of the match. Holland’s defensive approach restricted Lionel Messi to few opportunities, although Argentina were the more enterprising side overall. But victory in the shoot-out means Argentina now face Germany in a repeat of the 1986 and 1990 finals.

It was a cagey first half, with both defences on top. Lionel Messi was crowded out by the Dutch midfield, although Bruno Martins Indi was the only Dutchman booked for a series of fouls on Argentina’s number 10.

Martins Indi was taken off at half-time, as Louis Van Gaal for once made an early substitution, with the versatile Dirk Kuyt moving from right wing-back to left wing-back. When Nigel De Jong failed to last past the hour mark before being replaced by Jordy Clasie, it did not seem as if Van Gaal was preparing to play the Tim Krul card for a second game running.

Holland defended resolutely, with Aston Villa’s Ron Vlaar making a series of excellent interceptions. Argentina’s best chance of the second half fell to Gonzalo Higuain, who stabbed an Enzo Perez cross into the side netting.

Argentina joined in the defensive masterclass. A last-ditch tackle by Javier Mascherano snuffed out Arjen Robben after the Dutch winger made a flying run into the box in the final minute of normal time.

Argentina’s best chances in extra time fell to their substitutes. Rodrigo Palacio found himself through on goal but could only head straight at Jasper Cillessen. Then Messi’s run and cross fell to Maxi Rodriguez but his weak volley was easily held by Cillessen.

Cillessen did not face the ignominy of being subbed by Tim Krul, as he had been for the quarter–final shoot-out against Costa Rica. But he was unable to stop any of Argentina’s four penalties.

Key moment: Javier Mascherano’s block on Arjen Robben put an end to Holland’s best spell of the match, a brief few minutes at the end of normal time. Mascherano’s actions ensured the game went into extra time and typified the defensive rigour which dominated the match.

Man of the match: Sergio Romero. Argentina’s keeper was rarely troubled during a disappointing match. But when called upon in the penalty shoot-out, he made two first-class saves to deny Holland and send Argentina into the World Cup Final.

Matter of fact: Holland failed to have a shot on target in normal time.

Talking point: This game was always going to struggle to match the extraordinary events of the first semi-final, but the deliberately cautious approach of Holland ensured that there were very few chances over the course of the 120 minutes.