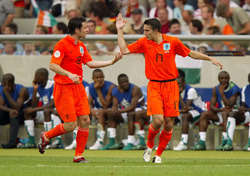 Robin van Persie has revealed he has the utmost confidence in Holland winning Euro 2008, because he feels ‘unbeatable’ within the squad.

Holland earned maximum points in their three group games against Italy, France and Romania, and they now face Russia in the quarter-finals.

“We’ve sent out a message,” Van Persie told the Daily Mail. “But this is just part of the dream, not the end.

“We have to win three more times to lift the trophy.

“With this squad I really have the feeling that we are unbeatable, though we have to take it step by step.

“That is why I want to be part of the team as it feels like something beautiful is happening.”

Van Persie, who spent the majority of last season out injured, is hopeful he is named in coach Marco van Basten’s first XI for the game against Russia.

“It doesn’t matter to me where I play,” added Van Persie. “If the boss believes I can be valuable for the team in another position, I will play there.

“Mentally I am fresh, physically as well. Of course I want to play in the quarter-final but we’ll have to see.”