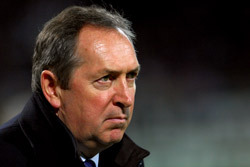 Houllier has maintained Lyon’s domestic supremacy but he found Europe a much tougher nut to crack. After an unbeaten Champions League group campaign this season they were touted as possible winners of the competition, but fell in the first knock-out round to Roma. Last season, they crushed PSV Eindhoven before falling to Milan in the quarter-finals.

The Frenchman spent six years at Liverpool between 1998 and 2004 when he won six trophies, including a cup treble in 2001, and he has been linked with a return to England.

Lyon president Jean-Michel Aulas had been hopeful that the former Lens and Paris St Germain coach would stay at the club, although last week he admitted he had made contingency plans in the event of Houllier leaving.

Aulas said last Sunday in remarks reported by L’Equipe: “A good president must have foresight.

“I don’t envisage the departure of Gerard Houllier but I have planned ahead with the board and I will not be deprived.”