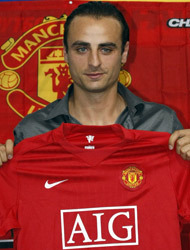 Sunderland haven’t won at Old Trafford since 1968 – will Man United make the Black Cats suffer again on Saturday? Gavin Beech thinks so, get all the best prices here.

Dimitar Berbatov admits he still needs to adapt in order to fit in at Manchester United.

The Bulgarian’s impact at Manchester United as minimal his first season following his £30.75million move from Tottenham last year. The 28-year-old scored just nine league goals last term and came in for some criticism from the Old Trafford support.

“That is my fault, not theirs. It is me who must change,” he said of the criticism.

“Manchester United are their club. They have treated me perfectly since I came.

“In my first year I was disappointed in myself. I need to say that.

“It was a big pressure for me and maybe I failed myself. I think I wanted to prove myself to these supporters.

“You must remember, they are used to Best, Charlton, Cantona. I am just Dimitar.

“I got a number of assists, but I must score more goals.

“I don’t know what I am doing wrong sometimes. Maybe it’s luck, maybe it’s me… who knows?

“At nights I have stayed awake thinking, ‘You could have done this instead’.”

Berbatov has begun his second term in better form and has scored two league goals already.

“I am more pleased with my overall game in this second season already,” he told The Sun.

“I feel that I have integrated myself better into the team. I am much stronger, much fitter. But I still wish I could score more.”

Berbatov admits his laid-back style has not always endeared him to the fans, added: “This is my style of play. I don’t run for no reason. I am always alert and ready.

“I looked at our ProZone stats and saw that I was ninth in distance covered.

“I am kind of a nerd. I looked at them too much, maybe. By the end of the season I was fourth. Maybe this season I will be first!”

The Bulgarian admits his price-tag was also a burden to carry, but he insisted that he was happy at Old Trafford.

“Who can live up to that sort of money? Nobody can. If I think about that money it is crazy to me. I can’t believe it,” he said.

“I am playing with legends like Scholes, Giggs and Rooney. Being coached by a man like Sir Alex Ferguson. How can I not be happy?”

Sunderland haven’t won at Old Trafford since 1968 – will Man United make the Black Cats suffer again on Saturday? Gavin Beech thinks so, get all the best prices here.