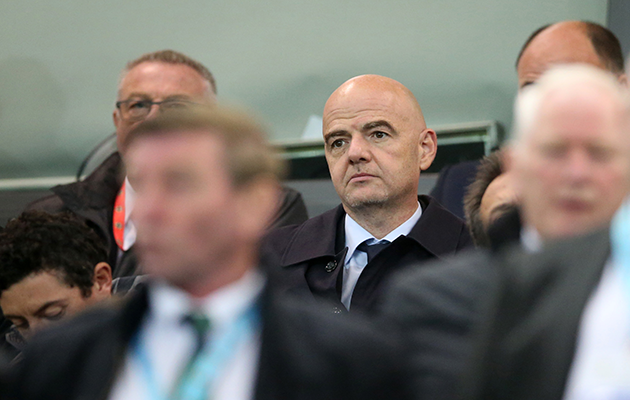 With the exception of the  London 2012 Olympics, British associations have traditionally avoided participation in the Games – under the misapprehension that it might bring into question the independent status of Northen Ireland, Scotland, Wales and England

But Infantino has reassured the four nations by stating their status would not be in danger if they re-established men’s and women’s teams for the Games.

“My view is certainly that I don’t see this as being an issue,” he said. “I see things in a much more pragmatic way in general. The Olympics are such that there has to be one team from the United Kingdom, so if we can find a football solution which allows a football team from the United Kingdom – and if they qualify to play – then this would certainly not jeopardise in any way whatsoever 130, 140, 150 years of history of the four home nations. That’s not an issue.”

Even though the women qualified to play in Rio, no joint team was set up and Sweden took the place instead. The English FA were in favour of a Great Brtain team but Scotland, Wales and Northern Ireland opposed the idea.

Infantino stressed it is up to the four countries to come to an arrangement. “It’s up for them to agree,” he said. “They speak the same language so they should speak to each other and see how they can best agree to do something like that.”

The FIFA president was speaking at the revamped Windsor Park in Northern Ireland where he refuted suggestions, to a gathering of British media, that his plans for a 40, or even 48, World Cup would dilute the competition’s quality.

“It’s not true that the quality goes down, it’s quite the opposite,” he said.

“Let’s not forget at the last World Cup, for example, if we speak about quality, England and Italy were eliminated by Costa Rica. The quality is there. Football is a world sport and we cannot confine it just to a few countries. It’s more than just Europe and South America, it’s the world. What is the right number, what is the right format, all of this is open for discussion.”