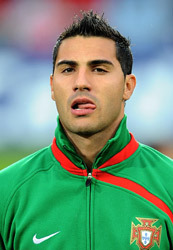 Porto have confirmed that they have reached an agreement to sell Ricardo Quaresma to Internazionale.

Portugal international Quaresma will undergo a medical at Giuseppe Meazza on Monday morning before signing a reported four-year contract.

A statement on Porto’s official website read: “Porto has reached an agreement with Inter Milan for the transfer of professional footballer Ricardo Quaresma.”

Inter’s Portuguese midfielder Pele will move in the opposite direction as part of the transfer.

The 24-year-old has been linked with a move to the San Siro all summer and Quaresma’s agents, Gestifute, confirmed a deal had been done in a statement released on Sunday night.

“Ricardo Quaresma will be a Internazionale player and Pele will represent Porto,” it read.

“The transfer of the Porto number seven to Jose Mourinho’s team is complete, in a deal that involves the sale of Pele to the Portuguese club.

“The agreement between the two clubs was completed this Sunday and driven by Jorge Mendes, owner of Gestifute.”