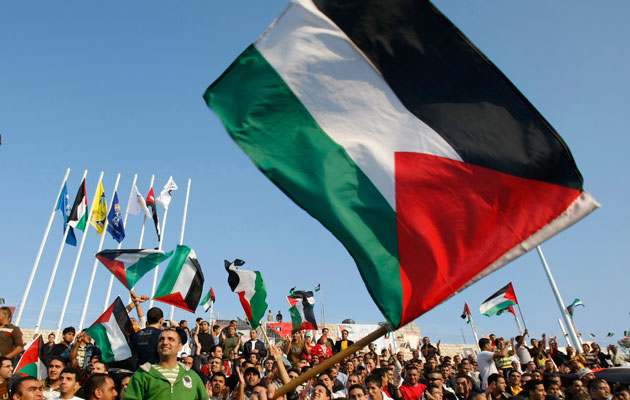 The top two men in Israeli football have headed for Switzerland in a bid to avert “a real and immediate threat” to their status within the world game.

New IFA chairman Ofer Eini and chief executive Rotem Kamer will plead for UEFA president Michel Platini and, next week, FIFA leader Sepp Blatter to head off the threat of a suspension from international competition.

This prospect erupted on March 27 after Palestinian sports supremo Jibril Rajoub’s formal submission of such a demand to FIFA’s annual congress in Zurich on May 29.

The Palestinians have grown increasingly impatient at a lack of progress in the long-running row over travel and transport restrictions imposed by Israeli security authorities.

Rajoub has threatened a congress complaint for the past two years and, each time, Blatter had placated him with a pledge of negotiations via an ad hoc task force. Two weeks ago, during the African confederation congress in Cairo, Rajoub told Blatter he had lost patience.

The Palestinian resolution demands the suspension of Israel until the granting of unlimited free movement of athletes, officials and sporting goods, the unhindered development of facilities and action to eliminate discriminatory behaviour among Israeli clubs and fans.

Blatter has insisted, increasingly loudly in the last few weeks, that politics and sport should not be mixed. This runs contrary to the more pragmatic stance adopted by Thomas Bach, president of the International Olympic Committee of which FIFA’s president is a member.

Initially Israel rejected Rajoub’s more aggressive stance by promising to “act at all possible levels to ensure the standing of Israeli football is not harmed.”

A statement threw the onus on Blatter and Platini by adding: “The Israeli FA believes that FIFA, with Sepp Blatter at its helm, and the heads of the various federations and associations will not permit a move which seeks to mix sport and politics in a manner that is completely opposed to the principles of the organisation and the aims of the game.”

The Israelis are not confident enough to leave the matter to Blatter – and European federation leader Platini, a FIFA vice-president – without pressing their own case face-to-face. Hence the imminent visits to the governing bodies’ headquarters in Nyon and Zurich.

Eini and Kamer meet Platini on Monday and a further meeting is scheduled with Blatter at the latter’s request.

A defiant IFA statement said: “The Palestinian submission is a blatant attempt to mix sport and politics although it is clear that the IFA has done all it can to enable proper athletic life in the Palestinian Authority.

“With all due respect, we do not set international policy or interfere with security considerations. Instead we believe football should serve as a bridge between Israel and the Palestinian Authority and may also contribute to a rapprochement between the peoples.

“The Palestinian association’s proposals for boycotts and sanctions can only exacerbate the situation.

“The threat to Israeli football is real and immediate. We are trying to avoid a situation where there will be a vote in congress on the improper request. If that is not possible we will raise enough support to prevent the motion from being approved.

“Michel Platini and Joseph S Blatter are true friends of Israeli football and, we are sure, that will do everything in their power to avert the suspension of Israel.

“The Football Association of Israel is operating in a variety of ways to ensure that Israel’s national team and Israeli football clubs will continue to be part of an international football. Our football team represents the state of Israel, and this is a national mission and national interest.”

If the motion were put to congress, approval would need a two-thirds majority which is unlikely. If passed, Israel would become only the second national association exiled from FIFA on political grounds after apartheid-era South Africa in the 1960s.