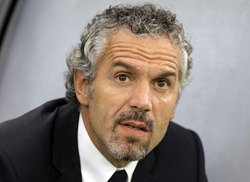 West Ham United non-executive director Mike Lee has confirmed that Gianfranco Zola and Roberto Donadoni both impressed in interviews for the vacant managerial post at the club.

The Hammers are looking for a new manager following Alan Curbishley’s resignation on Wednesday, and have so far reduced their shortlist down to four potential candidates.

Zola and Donadoni both impressed club officials while Michael Laudrup and Croatia head coach Slaven Bilic are among the other candidates for the role.

“There’s no favourite at the moment, we have set up a proper selection process,” Lee told the BBC.

“We have been surprised and pleased by the number of applications we have had and we are moving towards a short shortlist and ideally have a manager in place in time for the West Brom match next week.

“Slaven Bilic could potentially be on that shortlist but it depends very much upon his availability. If for whatever reason he was not available until January in terms of working with us, I’m afraid that will rule him out.

“We have a very strong shortlist and it’s going to be a tough decision with some exciting candidates.

“From the meetings that have taken place so far, the two that have really shone have been Donadoni and Zola.

“John Collins is very strong and will be an excellent manager in due course. He truly impressed but is maybe not quite right at the moment.”