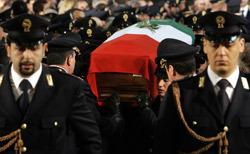 Italian football could restart as soon as next Sunday, according to Luca Pancalli, commissioner of the Italian Federation.

Serie A and B clubs meet on Tuesday to discuss the government proposal of closing those grounds deemed unsafe.

The move follows the cancellation of weekend football in the wake of the death of a policemen during clashes between rival Catania and Palermo fans. Filippo Raciti died after a bomb was thrown into his car during rioting at Friday’s Serie A game.

“There are the means to return to play on Sunday but we must wait for Wednesday’s government meeting before making a final decision,” Pancalli said.

On Monday the Italian interior minister, Giuliano Amato, said those clubs whose stadia did not meet security standards would not be allowed to admit supporters.

“We will not allow fans to go into a stadium that does not respect the current safety norms,” said Amato.

“In stadia like that of Catania I will not admit anyone, I am firm on this. That game shouldn’t have been played.

“Hence, only those stadia that meet the security norms will re-open to the fans, the other stadia will be used to play in but without fans until they meet guidelines.

“Our current norms are efficient if followed.”

The government met on Monday to discuss ways to deal with the current crisis within Italian football.

“Some of them will be reinforced and others will be innovations. The government will propose a law to Parliament regarding the relationship between clubs, stadia and the relationship of fans.

“The first regulations will be done immediately with an urgent decree and will be linked to the need of guaranteeing public order, which is the absolute priority.”

Other proposals included forcing clubs to adopt stricter anti-hooligan measures by the start of next season.