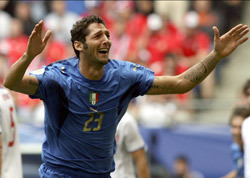 Italy are through to the last 16 following a 2-0 win over the Czech Republic, who for the second game running, were reduced to ten men.

Italy top the group and will face the runners up in Group F, while the Czech Republic return home to lick their wounds and rue the loss of Jan Koller, whose departure in the opening game undermined their chances in Germany.

The Czech Republic named striker Milan Baros in the side to play Italy in this vital Group E clash.

Baros missed the first two games with a foot injury but in the absence of Jan with a hamstring injury, as well as the suspension of Vratislav Lokvenc, coach Karel Bruckner was forced to gamble on the striker’s fitness.

Italy midfielder Simone Perrotta, who injured his leg in the draw with the USA, had also been passed fit to start. Daniele De Rossi was banned after receiving a red card in the same match.

The Czechs, who needed to win the game to be sure of going through, were the brighter of the teams in the opening minutes. On eight minutes Nedved set up Baros with a wonderful defence splitting pass, but the striker’s rustiness was evident in his poor first touch and Buffon was able to block his effort.

Nedved was rolling back the years in the early stages and he brought a full-length save from Buffon, which the Juventus keeper was only able parry into the path of Jankulowski whose shot from a narrow angle was again blocked by Buffon.

Italy suffered a major setback with the loss through injury of experienced defender Alessandro Nesta. On fifteen minutes, the Milan defender left the pitch clutching his groin, to be replaced by Marco Materazzi.

Italy’s best opening in the opening twenty minutes came when Zambrotta burst into the penalty area, but his cross eluded Gilardino. Shortly afterwards Gattuso went close when he headed onto the roof of the net.

Against the run of play, Lippi’s team took the lead on 25 minutes when Materazzi rose unchallenged to meet Totti corner and powered a header past Cech. It was the defender’s second touch of the ball since coming on as a substitute.

On the stroke of half-time, things went from bad to worse for the Czechs when Polak, who had already been booked, barged into the back of Totti and the referee had little choice but to produce a second yellow.

With news of Ghana taking the lead in their match with the USA, the Czechs at this stage were on their way home. It was going to take a Herculean effort for them to turn the tables on Italy.

After the break Italy enjoyed their numerical advantage and the largely anonymous Totti, who was finding space in the game for the first time, came close with a long range effort that Cech did well to knock round the post.

The Czechs immediately broke down the other end through Nedved, but the Juventus midfielder was denied by his club-mate Buffon in the Italian goal.

Italy’s best chance of the half fell to Camoranesi who should have done better from a Totti corner, but his glancing header drifted wide of the post.

Inzaghi had a wonderful chance to double the lead when the Czechs made a hash of clearing the ball, but with just Cech to beat, he was unable to hit the target from 12 yards.

With twenty minutes remaining and time running out for the Czechs, Nedved brought another fine save from Buffon when he fired in a fierce drive from the edge of the area. He had not given up the ghost, but the body language of some of his teammates indicated that they did not share his conviction.

In the closing minutes, Pirlo went on a meandering run into the Czech penalty area, and the ball eventually fell to Inzaghi who should have settled the match but he miscued his header form six yards out.

Moments later Inzaghi made amends for his earlier misses when he beat the offside trap and skipped past Cech before rolling the ball into the empty net.

So, Italy are in the knockout stages, and as group winners, no doubt grateful to be avoiding Brazil in the next round. On this evdience, they will need to improve significantly if they are to mount a challenge in Germany.