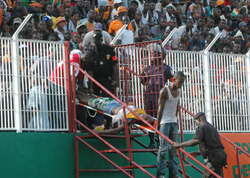 The president of the Ivory Coast Football Federation Jacques Anouma has asked for calm as investigations start into Sunday’s tragedy which left at least 19 people dead and 132 injured.

The incident occurred when a wall collapsed at the Felix Houphouet-Boigny stadium in Abidjan shortly before Ivory Coast beat Malawi 5-0 in a World Cup qualifying match.

“We can only deplore what happened,” Anouma told Ivory Coast newspaper Le Patriote.

“We are obliged to wait until the end of the inquiries that the Minister of Security himself has ordered so that we know what happened.

“We really can’t understand what happened at a match where everyone was warned it was a sell-out.

“We are really sorry. We give our condolences to the families of the victims and we wish a speedy recovery to the injured.

“We have played more important matches, things have happened, but not like this. We can’t understand it.

“What I ask of Ivorians is not to start useless arguments, but to ensure that these kind of things don’t happen again. It’s sad. I’m deeply upset.”

Anouma has called on everyone in the country to do their bit to ensure there is no repeat of the tragedy.

“These are things that have already happened elsewhere,” he continued. “So, we’re waiting to see the report from the police and the person in charge of security for FIFA to see exactly what happened.

“But above all we need to know precisely the circumstances in which the drama happened.

“I think now each one of us need to take on board our own responsibilities. We organise ourselves with partners and everybody at their own level has to do their own work. That’s all I ask.”

Anouma added: “What I’m calling partners are the doctors, the forces of order, the organisers, even the population itself, and they have to respect the rules.

“We have to ensure that for the next matches we talk even more about the security measures. That would allow us to avoid this type of drama and ensure it is never repeated. That’s the next battle.”

“I have come here with my colleague from security to announce very sad news,” he said on state television. “Because it is about a drama that happened even before the start of the match.

“Numerous spectators started falling over each other. And in the crush, they trampled on each other and that has led to 19 dead and 132 injured.

“It’s obvious that the head of the State will very soon say what measures will be taken on a national level. Because we have never known such a tragedy.”

FIFA released a statement today expressing their condolences. They also asked for a full report into what happened.

“On behalf of FIFA and the worldwide family of football, I wish to express extreme sorrow and extend our condolences to the Ivorian football community and, most importantly, to family, friends and loved ones following the tragic deaths in Abidjan yesterday,” said FIFA president Sepp Blatter.

“FIFA is in contact with the Federation Ivorienne de Football and have requested a full report from them, as well as the local authorities to establish the sequence of events that happened outside the stadium before the match.

“Once this report has been received, FIFA will be in a position to make further comment, as well as continue our efforts to ensure that such tragic circumstances do not happen again.”