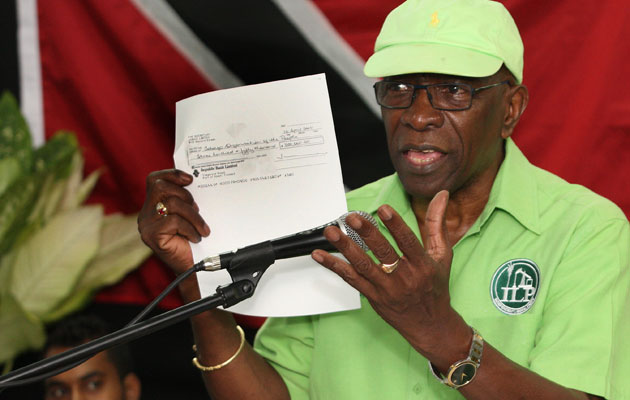 Former FIFA vice-president Jack Warner says he knows why Sepp Blatter resigned and that he has an “avalanche” of evidence regarding corruption at the sport’s governing body.

In a televised address entitled “The gloves are off” broadcast in Trinidad and Tobago, Warner said he would reveal everything he knows.

“Blatter knows why he fell. And if anyone else knows, I do,” Warner said.

Warner said some of the documents he had were connected to financial dealings with FIFA, but he claimed to have others which linked FIFA officials, including president Sepp Blatter, to the 2010 government election in Trinidad and Tobago.

The TV6 website reported that in the five-minute broadcast, Warner said the file “also deals with my knowledge of international transactions at FIFA, including its president Mr Sepp Blatter and, lastly, other matters involving (Trinidad and Tobago’s) current prime minister”.

Warner added: “I apologise for not disclosing my knowledge of these events before. There can be no reversal of the course of action I’ve now embarked upon.

“I have kept quiet, fearing this day might come. I will do so no more. I will no longer keep secrets for them who actively seek to destroy the country. I reasonably actually fear for my life.”

Warner is among more than a dozen officials charged by the US Department of Justice in the corruption investigation. But, if he does go down, he will not go quietly and by judging by Wednesday’s remarks, he will not go down alone.

“Not even death will stop the avalanche that is coming,” Warner said. “The die is cast. There can be no turning back. Let the chips fall where they fall.”
Warner has been accused of taking a bribe of $10m from South African officials in exchange for votes in the 2010 World Cup bidding process.

Warner is facing possible extradition to the United States after being indicted by American authorities on the corruption charges but said he will contest this.

He added: “I have no intention of allowing them to deprive me of my freedom.”

Warner’s promises to expose the FIFA president have been heard before. Back in 2011, when he had been banned for life from all footballing activities for his part in the Mohamed bin Hammam bribery scandal, Warner threatened a ‘tsunami’ of revelations that would bring down Blatter. In the event, they turned out to be nothing more than a minor ripple and the FIFA president sailed on serenely.