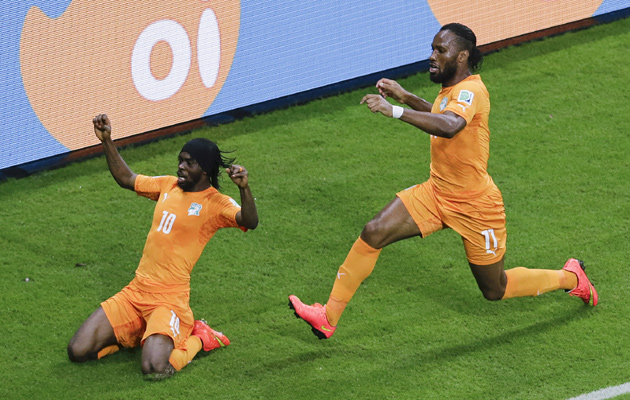 Match overview:Japan took a first-half lead in rainswept Recife with a stunning shot from Keisuke Honda but Japan backed off in the second half and allowed Ivory Coast to turn the match around with two headers, both from Serge Aurier assists.

Key moment: Wilfried Bony powered Ivory Coast back into the match, scoring the equaliser with a bullet header from Serge Aurier’s right-wing cross.

Man of the match: Ivory Coast’s attacking right-back Serge Aurier supplied the crosses for both of his side’s goals.

Talking point: Ivory Coast coach Sabri Lamouchi stuck to his guns and left centre-forward Didier Drogba on the bench, preferring the in-form Wilfried Bony in attack. However, he gave Drobga an opportunity as a 62nd-minute substitute and the added attacking threat brought by 36-year-old striker helped Ivory Coast to equalise and then take the lead within a two-minute spell.