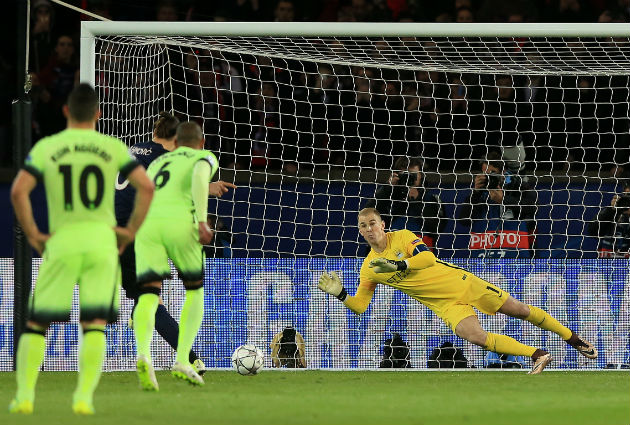 Last night’s Champions League match was finely poised after Fernandinho scrambled in an equaliser to spare to blushes of fellow midfielder, Fernando.

Fernando was involved in a mix up with Manchester City goalkeeper Joe Hart, and gifting PSG striker Zlatan Ibrahimovic with a fortuitous goal.

Roy Keane questions Joe Hart over both of PSG's goals in Paris https://t.co/oNGoPwAEH5

Until then, it appeared that Ibrahimovic was having a very rare off-night in front of goal.

He missed a glorious chance after being played through on goal by midfielder Thiago Motta with the goal gaping at his mercy – perhaps he has Joe Hart to blame for that – after the England keeper made a magnificent save from Ibrahimovic’s penalty.

This save could yet prove to be what takes Man City through to their first Champions League semi-final.

History beckons for Hart’s team, and he agrees with this assessment:

“It was a crazy game that we were fully involved in.

“Two away goals is great, hopefully we make them count. It was a good game of football and we will wait and see how good a result that is.

“We are making history for this club and we don’t want it to end.”

Hart did acknowledge that the team had to tighten up defensively, but said that with the team’s firepower upfront, City had a fantastic chance to progress.

“I’ve given Fernando the ball and he obviously thought there was an option to pass inside and the big man put his size 15s on it and it went in,” Hart said.

“We’ve got goalscorers and we just need to improve as a team, and keep goals out at our end. We shore it up a little bit more, in an ideal world.”