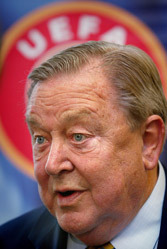 The bookmakers have made Chelsea their clear favorite to win Champions League after they came from behind twice to hold Barcelona 2-2 in the group stages. Click here to find out!

Uefa will hold an inquiry into the game – in which Chelsea had six players booked – but Johansson, 76, said he was disappointed by the Blues manager.

“Mourinho has a duty to see he has respect for the game and not to behave like a kid,” he told the Sunday Mirror.

“He makes statements like someone who’s been promised candy but didn’t get it.”

Johansson, who was in London promoting his bid to be re-elected as Uefa president, said fining Chelsea was unlikely to have a significant impact on the club.

“I do not believe in fines when Chelsea have the money they have to pay it. It must be judged differently,” he said.

“It’s like any crime – when it happens the first time you are treated in a fairly decent way but, if you repeat the crime, sentencing is much tougher.

“Sometimes we are not severe enough.”

Johansson also said he was unhappy with the way in which Chelsea owner Roman Abramovich had used his wealth to build a squad of world-class players – but admitted Uefa could do nothing to prevent their policy.

“If someone is wealthy enough to buy a club and he likes to spend his money buying players what can we do about it?” he said.

“If you talk about law, that’s one thing. Here it’s a question of morals.

“I’m very, very sad about this development. I’m against it.

“I have to wait until the laws exist and try to come back to the original situation where everybody was happy when we had a balance between home-produced and imported players.

“And more and more clubs and coaches are doing the same.

“Is it morally wrong what Chelsea are doing? For me, it is.

“But, at the same time, I cannot blame them for doing something that in law is accepted.”

The bookmakers have made Chelsea their clear favorite to win Champions League after they came from behind twice to hold Barcelona 2-2 in the group stages. Click here to find out!