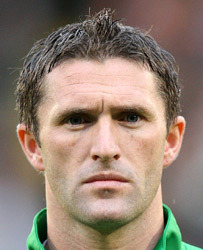 Liverpool striker Robbie Keane has spoken of his disappointment at the constant speculation over his Anfield future.

Keane’s long-term future at Anfield has been the subject of almost constant conjecture following his failure to impress since joining from Tottenham in the summer.

Keane silenced some of his critics with a well-taken goal in the 1-1 draw with Arsenal on Sunday and the Republic of Ireland international admits he is frustrated by people from outside the club discussing his future.

“I am not frustrated at all (by the speculation),” said Keane.

“I suppose the only thing that I sometimes get frustrated by is when people outside the football club are talking about things to do with me, because they are trying to create something that is not there.

“I have already said that I know I will score goals for this club and I would prefer to be judged at the end of this season, not in December.

“For me, it is always nice to score against Arsenal especially as I had been getting a little bit of stick before the goal.

“I suppose that was always going to happen with me being a former Tottenham player so it was sweet for me to score against them.

“But it’s always nice to score a goal, particularly when it means you get back into the game.”