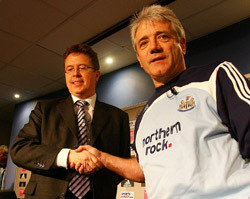 Kevin Keegan is confident of keeping his job as Newcastle boss as he prepares to meet chairman Mike Ashley.

Ashley is reportedly angry at comments made by Keegan where he admitted his side will not be able to compete with the Premier League’s top four for years.

But Keegan remains confident he will be given the opportunity to carry on at Newcastle.

“I’ve got three years left [on his contract] and I am looking forward to the next three years. At least you know I’ll only be 60 then,” he told the Daily Mail

“I wasn’t asked about the top four, I was asked ‘how do you think you fared today against Chelsea’?, and ‘how far away were we from that’?

“That was the question I was asked and I said ‘a million miles’. You can go round and get thousands of opinions from the fans, who I think are always a good barometer.

“You can go to the fans, not just of Newcastle United, but of most other clubs and say ‘can your club get into the top four next year’? They would probably say ‘we would like to think so, but if we are honest, that top four has been the same for a long time’.

“I have seen what other people have come out and said, like [Premier League chief executive] Mr [Richard] Scudamore, to defend or try to put a different slant on it, and I fully understand that.

“But what I expressed was my view, and I stick by it.

“The majority of people you talk to who have a knowledge of the game, they realise by looking back over the last six years that that top four has been the same.”