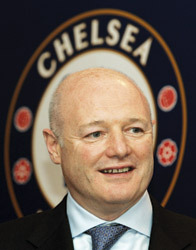 Chelsea chief executive Peter Kenyon has admitted that he is disappointed with the club’s current style of play.

Kenyon praised manager Avram Grant for successfully leading the Blues to a Champions League semi-final but still thinks there is plenty of room for improvement.

“I don’t think that it is where we want to be but everybody still wants to improve,” he said.

Chelsea are three points behind Premier League leaders Manchester United, with five games to play, and face Liverpool in the Champions League semi-final.

However, Grant has still failed to win over a section of Stamford Bridge fans and others have questioned his approach but Kenyon inisists he should be backed.

“We are in the semi-final of the Champions League and we are right up there in the most competitive run-in of the Premier League that we have had for many years,” he stated.

“The crowd needs to get behind the team and that is as much Avram as anyone else.

“It has only been a fairly small element (who have been anti-Grant) and I’m sure we will see the crowd at Stamford Bridge behind the complete team.”