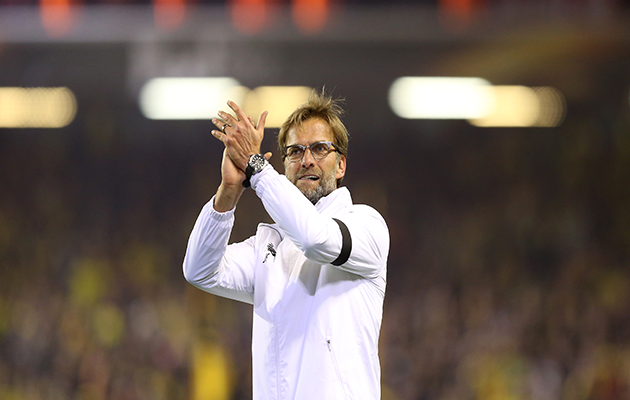 Liverpool trailed 2-0 and 3-1 on the night, but four second half goals, the last of which came in stoppage time, completed an astonishing turnaround on emotional night at Anfield. The result means Liverpool go through to the semi-finals 4-3 on aggregate, where they will face one of Villarreal, Shakhtar Donets or holders Sevilla.

“It was a wonderful, wonderful night,” said Jürgen Klopp, whose Liverpool side scored four second half goals to complete a remarkable comeback against his former club.

“That was football at its best, a great game to experience for everyone involved. We wanted to be brave but that becomes more difficult when you go behind so early, though in the end I think the result was deserved. We might have got a little bit lucky but we never stopped trying and we created a lot of chances.”

Liverpool have now been installed as favourites to win the trophy, and with it entry into next season’s Champions League, though Klopp was visibly annoyed when asked about that possibility.

“Don’t ask me about this shit,” he told BT Sport. “Let us get through the semi-final first,” he added. “We have just played a brilliant, outstanding game, but we are bound to get a really strong opponent in the next round and we will have to do it all over again.”

Klopp admitted his team’s chances of progressing looked slender as his former side raced to a 2-0 lead within the opening ten minutes of what turned out to be a tumultuous night at Anfield.

“The counter-attack of Dortmund is well known, and they hit us twice,” he said.

“Very often in football the game would have been over, but not here, not with this Liverpool team. As was proved in 2005 when Liverpool came back from three goals down to win a Champions League final, anything is possible if you try.

“It did not really look likely at first, but when we started to come back everyone could see something changed inside the stadium. You could feel it and smell it. We had to show our character and that’s exactly what the lads did. It was pretty cool to watch, but the lads deserve all the credit.” 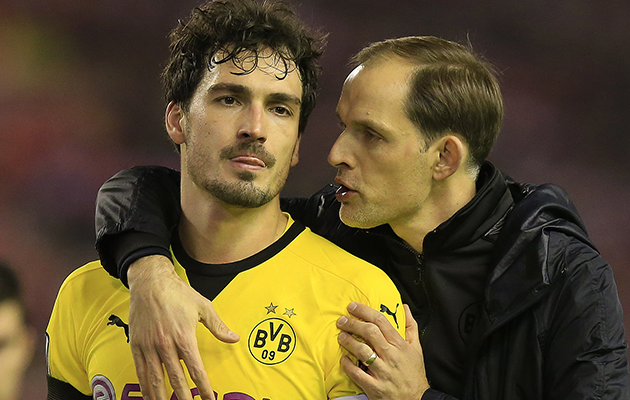 Dortmund’s coach Thomas Tuchel, (with Mats Hummels) could not quite believe what he had witnessed.

Dortmund’s coach Thomas Tuchel was in a state of disbelief after watching his side throw away commanding leads on two occasions.

“I cannot explain what took place, because that would imply there were logical or tactical reasons behind the result, and I don’t think any of that happened,” he said.

“We reacted well to Liverpool’s first goal, but once they scored again we began to lose our control of the game. It was strange, like we stopped trusting ourselves. We no longer dared to attack, we were concentrating on defending, and every supporter in the ground seemed to know there would be a lucky punch right at the end. It was as if it was meant to be.

Tuchel was gracious in defeat, congratulating Liverpool on their performance.

“Liverpool took a lot of risks towards the end, but they beat us fairly enough and I would like to offer congratulations,” he said. “It is important to be honourable in defeat. It was quite a game, quite a night, but Liverpool won and they deserved it.”