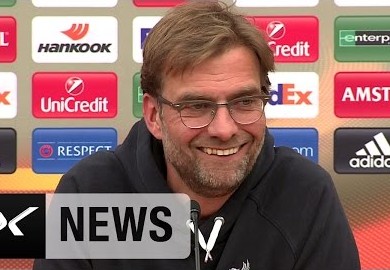 Liverpool manager Jurgen Klopp has said that no decision had been made whether Daniel Sturridge with start tonight against Villarreal in the Europa League semi-final second leg – but he did say that he would be “absolutely involved”.

When asked about whether Sturridge would start tonight Klopp said:

“I was waiting for this question. He could be, 100 per cent, but I’ve made no decision yet about the line-up.

“In all these thoughts, Daniel Sturridge is absolutely involved.”

Klopp said that his side have to approach the game with a clear frame of mind, and forget about last week’s narrow defeat.

“It’s a normal result. In Europe, you can lose away,” Klopp said.

“We have thought a lot about our game. We know their strength. Our skills, quality, passion, readiness together with the atmosphere at Anfield, that’s what I’m looking for.

“We have to know about the game, not with pressure, only with joy. It’s only playing football. Football is a fair game. If we play our best then we can go to the final.”

Klopp added: “When I think about my team, I never have a limit where it could go. I don’t know how far we are. I’m not interested.

“The players have given me a lot of positive signs about their quality. We don’t have to think too much. We are ready. All we did is to be perfectly prepared for a game like this tomorrow.”