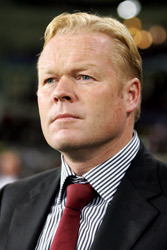 Ronald Koeman has admitted he would like to bring Hamburg playmaker Rafael van der Vaart to Valencia.

The Spanish club today confirmed the appoinment of Koeman as their new coach and the Dutchman already has an eye on January’s transfer window.

Koeman worked with Van der Vaart at Ajax and admits he would be keen to sign the player in the New Year.

“He is a fantastic player whom I would gladly see at Valencia,” Koeman told De Telegraaf.

“There are some things which occurred in the past, but we learn from everything.”

During his time as Ajax coach, Koeman handed Van der Vaart the captaincy at the start of the 2004-05 season only to strip the player of the job several months later.

However, Van der Vaart has acknowledged that his previous problems with Koeman would prevent a move to the Mestalla.

He said: “What has happened in the past between me and Koeman does not stand in the way of a move to Valencia.

“We both did things that we might do differently, but that has happened.”

Last summer, Van der Vaart came close to a move to Valencia, and even went as far as having his picture taken wearing a Valencia shirt, before the move fell through and he was forced to return, rather red-faced, to Hamburg.