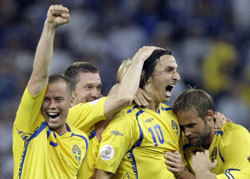 “It was very good play before and the conclusion was world class. It was very beautiful,” said Lagerback.

“The players did an excellent job – it’s obvious that Greece are a very difficult team to play against. Physically they work very hard, they move their line forward and we worked hard on that.

“It’s fantastic to win, particularly with the way we played, it was a 100% deserved victory.

“We knew they might play up to five defenders and they would have man-markers.

“It’s tough to face them because they are physically strong. I’m not surprised they had one marker on Zlatan.”

Ibrahimovic, who had not scored an international goal for two and half years gone, praised his team-mates for their efforts.

“It was a difficult game and we did a fantastic job,” said the Inter forward.

“I saw the opening to the left and that’s where I put it. It was a fantastic feeling when the ball went in.

“We worked and were intelligent with our passes. We didn’t let them play their own game and pressed them.

“It wasn’t an easy game for the strikers as they had three good centre-backs and changed their tactic from four in defence.”