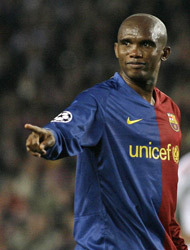 Barcelona president Joan Laporta has admitted that he feels “saddened” by the continuing speculation surrounding the future of striker Samuel Eto’o.

Manchester City are waiting on a response to their £25m offer for the Cameroon international and the situation became further confused this week when Barcelona claimed they wanted him to stay but were unable to match his astronomical wage demands.

However, the player’s agent called a press conference to state such allegations were “absolutely false” and that representatives of the Catalan club had twice told him that Eto’o was surplus to requirements at Camp Nou.

“His representative and Samuel have said that he wants to continue and the club have offered him a contract renewal with the same conditions that he had, which we believe are very good,” Laporta said on Cadena Cope.

“I think that what his representative is doing is not helping Samuel. It’s a mistake to take the debate in the media. It’s not doing the player any favours.

“Personally this matter has left me a little disappointed, it saddens me because I hold Eto’o in high esteem.

“I would like, in the same way as I’ve said how up until now he has given a lot to Barca, that he (Eto’o) reflects on what Barca have given him.

“I will do everything possible to find the best solution for the club and for Eto’o. It would be best for both parties.”

Laporta has also insisted Barca would not be held to ransom by Valencia over a possible move for David Villa.

“Regarding Villa, it would not be prudent for me to reveal how the negotiations are going,” he said. “We would be delighted that he came, but it will depend on negotiations and the price. We cannot do things that will break the model that the club has.”