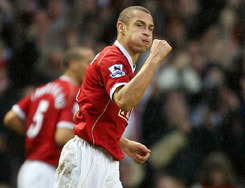 Manchester United’s on-loan striker Henrik Larsson has been given the go-ahead by his Swedish club to stay at Old Trafford until the end of the season.

Larsson, 35, who opened his United account on his debut in Sunday’s FA Cup win over Aston Villa, signed from Helsingborg on a three-month loan deal this month.

But Helsingborg chairman Sten-Inge Fredin has confirmed that he will allow Larsson to stay on until the season’s end.

“If he wants to stay then we’ll open that discussion with United. We will not stand in his way,” said Fredin.

Former Celtic and Barcelona striker Larsson, however, is refusing to look beyond his initial three-month loan period.

“It is all ifs and I am just taking one match at a time at the moment,” he told the Times newspaper.

“He could have scored two or three,” said Ferguson. “With his movement and experience, he was terrific. The goal summed him up, no drawback.

“Henrik has scored goals throughout his career and some of them have been crucial. Eric Cantona was like that.

“We created a lot of chances and some of our football was terrific.”

Villa boss Martin O’Neill, who is all too familiar with Larsson from his days as Celtic manager, was generous with his praise of the striker.

“Henrik is always capable of scoring a goal like that,” stated O’Neill.

“People said he would only score goals in Scotland and I never thought for one minute he wouldn’t score in any league he chose. He has gone on to show that.”