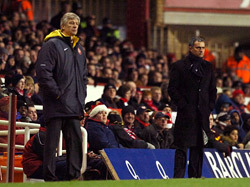 Jose Mourinho’s latest disagreement with Arsene Wenger was apparently caused by the Arsenal manager doubting the authenticity of a message written by Mourinho in a Christmas card.

Mourinho wrote a personal message on a card apologising for labelling Wenger “a voyeur” in recent row between the two men.

But he was angry that a member of Arsenal’s backroom staff doubted whether he had written the message, so refused to shake Wenger’s hand after Chelsea’s win.

The Chelsea boss has sent Christmas cards to all 19 Premiership bosses as well, but is believed to have written a special message for Wenger in the hope of improving relations between the pair.

Wenger recently threatened legal action after Mourinho said: “I think he is one of these people who is a voyeur. He likes to watch other people.

“There are some guys who, when they are at home, have a big telescope to see what happens in other families. He speaks, speaks, speaks about Chelsea.”

Wenger was angry and Mourinho then claimed he had a 120-page dossier that proved his claims.