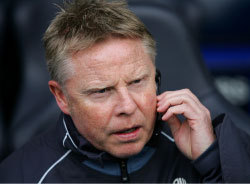 Portsmouth face Cardiff in the first FA Cup Final without a ‘big four’ club since 1991. Click here to read match preview and view the latest odds!

Former Liverpool player Sammy Lee has returned to the club after being appointed as Rafael Benitez’s assistant manager.

Lee, a member of the hugely successful 1980s Liverpool side, previously worked as reserve team manager and then first team coach under Graeme Souness and Gerard Houllier.

He eventually left for a full-time role with England in 2004 before joining Bolton Wanderers in 2005.

Benitez said: “Sammy knows about the passion of the club and about the standards that we set here.

“We have not brought Sammy back simply because he used to play for the club and used to work here as a coach.

“He is a very experienced and very well respected coach in his own right and his reputation in football made him the outstanding candidate when we knew we were looking for a new member of our coaching staff.”

Lee will relace Alex Miller, who left his role as first team coach earlier in May to take up a managerial position in Japan.

Lee served as Sam Allardyce’s deputy at Bolton for a while before replacing him as boss in April 2007. However, after a terrible start to the 2007-08 season, with Bolton lying second from bottom of the Premier League table, he was fired by the Lancashire club.

Lee said: “The club have made great progress over the last few years and they were so close to having a great season this time around.

“Hopefully we can keep improving and get to where we all want.”

Portsmouth face Cardiff in the first FA Cup Final without a ‘big four’ club since 1991. Click here to read match preview and view the latest odds!