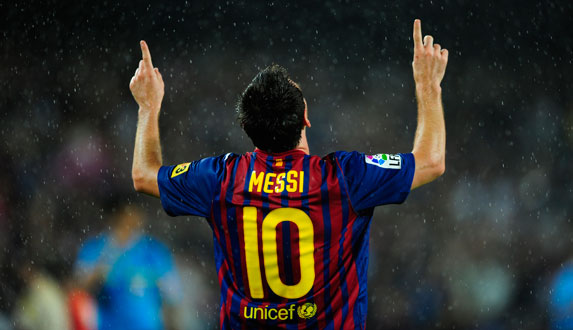 Lionel Messi has posted a video of himself cooking dinner for his team-mates – all apparently because he lost a bet.

He posted a video and picture collage through his Instagram page on Tuesday evening with a caption that read: ‘I lost a bet… And I had to cook.’

The 26-year-old could be seen cooking what looks like the traditional Argentinian dish of beef, before serving up perfectly carved pieces.

Manwhile, Messi can become the all-time top club goalscorer in Spain tonight when he faces Real Sociedad in the the Spanish Cup semi-final second leg.

He is currently on 334 goals for Barcelona in official matches just one behind Telmo Zarra who scored 335 for Athletic Bilbao. It is worth repeating that he is still only 26. Were it  not for his recent hamstring injury, the record would already be his.

It will be another incredible milestone in Messi’s career, but yet another landmark, one that will be even more impressive, is looming on the horizon.

Messi is currently fifth in the all-time scoring charts with 226 league goals but needs just one more goal to draw level with Alfredo Di Stefano in fourth place who scored 227 goals.

Next up on Messi’s would be third-placed Raul who scored 228 goals for Real Madrid, albeit in almost twice as many games, and Hugo Sanchez who scored 234 goals for three Madrid based clubs: Real, Atletico Madrid and Rayo Vallecano.

That would just leave one more goalscoring legend left for him to topple and again it is Bilbao striker Zarra who stands between him and top spot. Zarra scored 251 league goals for Athletic Bilbao from 1940-1955. Remarkably, with a goal every 0.91 matches, he is also the only man in the top ten with a better strike rate than Messi, who has scored a goal every 0.86 matches.