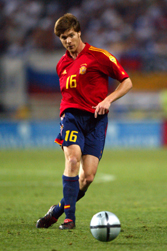 Manchester United have won the last two Community Shields so can new-look Chelsea dethrone the Premiership champions at Wembley?

Liverpool have confirmed they have agreed a fee with Real Madrid for the sale of Xabi Alonso.

Last night Liverpool issued a statement which brought to an end Alonso’s five years on Merseyside.

It read: “Liverpool Football Club this evening confirmed they had reached agreement for the sale of Xabi Alonso to Real Madrid, subject only to a medical. The terms of the deal will remain confidential and undisclosed.”

Spain international Alonso has been a long-term target of the Primera Division giants but Reds manager Rafa Benitez has been reluctant to part company with the midfielder.

However, Real appear poised to finally get their man after finally agreeingt to meet Liverpool’s valuation of the player, believed to be in the region of £30million.

The 27-year-old Alonso signed at Anfield from Real Sociedad in 2004 and has made 143 Premier League appearances for the side.

Real have embarked on an extravagant spending spree this summer and they have already signed the likes of Cristiano Ronaldo from Manchester United, Kaka from Milan and French striker Karim Benzema from Lyon.

Benitez is believed to want to close a deal to bring in midfielder Alberto Aquilani as Alonso’s replacement. Roma are willing to sell for around £15m and the player is happy with a five-year contract worth around €4m a year.

Benitez is also known to be considering moves for either of Valencia pair David Silva and David Villa.

Manchester United have won the last two Community Shields so can new-look Chelsea dethrone the Premiership champions at Wembley?