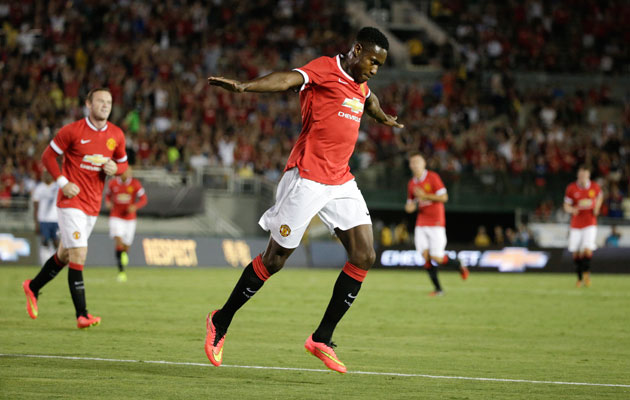 “The result always matters,” said Van Gaal. “With such a result you get confidence, and confidence in a new system. We introduced a new system and played two times on the training pitch 11 v 11. It is not so much, but the boys are willing to pick up the information.

“It is fantastic how they have performed today. Last week, 10 players who played tonight were not even in our training complex. But when you see us train, you can expect something but not 7-0. It was a surprise, but they were also beautiful goals.”

Van Gaal introduced a 5-3-2 formation, which ensured a potency and fluidity to United’s attacking play that was absent last season under his predecessor David Moyes.

“It was not just the goals, but the beautiful attacks,” Van Gaal enthused. “When you want to change a system, you must start at once. We don’t have time to prepare for other things.

“The other system they can play is 4-3-3 and they have played it for many years. I can change back if the system doesn’t work. With the quality of the players we have, I can play 4-3-3 with three strikers on the bench, but want to play with two strikers.

“We have four No10s, so the selection is not balanced in my eyes. I have decided to play this system because of the quality of the players. But if we lose, I can change back to another system.”

Looking to the future

United now travel to Denver where they face Roma on Saturday in the opening match of the International Champions Cup.

Van Gaal added: “I am never afraid and I am thinking of my team, not Roma or other teams. The qualities of my team mean they will also try to perform well.”

The Dutchman claimed the squad are not suffering from a lack of confidence despite finishing seventh last season and missing out on European football.

“Not a problem. I never go back, I always want to see the future,” he said.

“When I see my team playing a new system, it is better to win 7-0 than to lose because the players will then doubt the system. But now I don’t have that problem.”