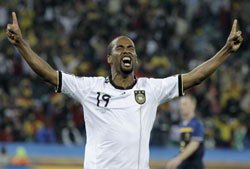 Germany coach Joachim Low said he was pleased with the way his team performed after the 4-0 win over Australia in their Group D opener.

Germany took control of the match early on through goals from Lukas Podolski and Miroslav Klose and following the dismissal of Australia’s Tim Cahill shortly after half-time, Thomas Muller and substitute Cacau were able to extend their advantage.

“There is still room for improvement,” said Low. “Our defence was excellent, they performed very well and I was very happy with our counter-attacks. But in terms of closing the space between defence and midfield, I felt sometimes we were too defensive. We will work on this.

“It’s always great to see that my team can implement my tactics on the pitch. From beginning to end, Australia was rather defensive and we had to change our attacks. I thought we did very well and we scored very nice goals. We tried to go deep down with Klose and Muller while we also kept the ball low and that created problems for Australia’s defence.

“The first match always comes with a lot of pressure. It’s always important to win to get self-confidence. We can be very satisfied, happy and confident. But we have to keep our concentration. We want to reach the last 16 stage at least.”

Low was impressed by Brazil-born striker Cacau, who scored less than two minutes after coming on as a substitute.

“I think I have a range of possibilities in every position,” said Low. “Cacau had a great training camp with us and I knew I had a great player coming off the bench.”

Klose, who scored his 11th World Cup goal, believes the performance will make people sit up and take notice of Germany this year.

“Everything worked well and it is important that things went well in the first game,” he said. “We have earned some respect. You could see that we had fun playing football out there. I know what I can do. I feel great.”

“Our defence was excellent, they performed very well and I was very happy with our counter-attacks, but in terms of closing the space between defence and midfield, I felt sometimes we were too defensive,” he said. “We will work on this.”

Australia boss Pim Verbeek wanted to focus on the remaining two games in the group.

“The moment you lose this game, you have two finals,” he told SBS TV. “We know what we have to do: beat Serbia and Ghana. It is that simple.”

He added: “The last thing you want is a goal after ten minutes – that was not the plan, of course. We took some time to get over that.”

Verbeek said he did not see the red card incident but feels referee Marco Rodriguez may have been overly strict.

“I don’t talk about referees,” he said. “I didn’t see the replay but I have seen a lot of yellow cards today and I didn’t think it was a harsh game.”