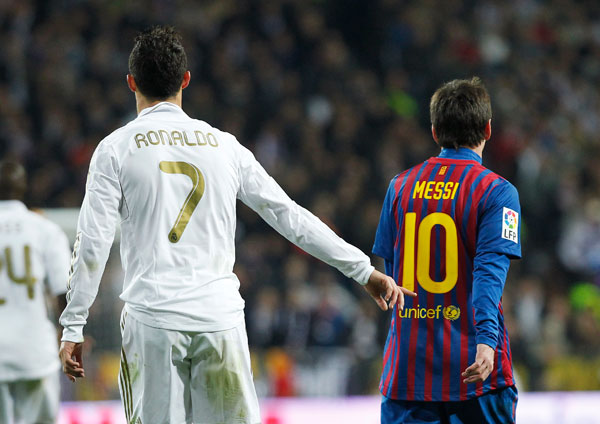 Jordi Alba believes that Real Madrid should be more afraid of Lionel Messi than Barcelona are of the reigning Ballon d’Or holder.

Speaking ahead of this weekend’s eagerly-anticipated Clasico at the Santiago Bernabeu, the Spain international acknowledged that Madrid’s Ronaldo is capable of winning matches all on his own.

However, the left-back still believes that his team-mate, Messi, will be the player to watch on Sunday.

Indeed, when asked to pick the better player, Jordi Alba replied: “I would say Leo – and not just because I play on his team. I’ve thought that since I was at Valencia.

“Cristiano is a beast. He is very important for Real Madrid. When they are not having a good day, he always appears.

“But we have Leo and Madrid should be more afraid of him.”

Neymar, Barcelona’s big summer signing, has struggled to recapture his Santos form and there has been speculation that he will start Sunday’s game on the substitutes bench.

Jordi Alba is convinced, though, that the Brazilian will shine if picked to start.

“Neymar has had a good season, even though he had his injury,” the defender stated. “Who plays in the Clasico depends on the coach, but I think Neymar’s done well.

“But with Pedro, Neymar or Alexis, my position is the same as always. Nothing changes in terms of how I play.”

With just 10 games remaining Barcelona trail their arch-rivals by four points and Jordi Alba admits that Sunday’s encounter is a must-win game.

“There are no favourites in a Clasico like this,” he said. “And it will be a beautiful match to play in.

“Madrid are a great team. They have demonstrated this through their history and they are a team that, following the arrival of (Carlo) Ancelotti, I personally like a lot.

“They are very difficult [to deal with] on the counterattack. We must be disciplined in defence.

“We have to win at the Bernabeu. We have to forget about what happens with the referee or the fans. We just have to play a great game.”

Given both players phenomenal form in recent years and their ability to deliver when it really matters, it is not unreasonable to assume that Sunday’s showdown will be settled by one or the other.