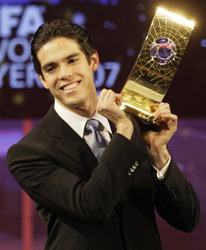 Milan have told Manchester City that the future of Kaka, the 2007 World Player of the Year, will be decided by the player alone, according to Gazzetta Dello Sport.

City have opened talks with Milan over the possibility of bringing Kaka to the Premier League in a deal that would smash the world transfer record.

At yesterday’s meeting in Milan, a delegation from City are also said to have inquired about the availability of midfielder Gennaro Gattuso and their Brazilian goalkeeper Dida.

Unconfirmed reports yesterday said the fee for the three players would be around £100m, more than double the world record £46m Real Madrid paid Juventus for Zinedine Zidane in 2001. A report on the website of Mediaset, a TV company owned by Milan owner Silvio Berlusconi, suggested City want Kaka “at all costs”.

City’s long-held interest in the Brazilian gathered pace when a four-man delegation travelled to Milan for talks. It is understood the delegation was led by the executive chairman, Garry Cook, and included two representatives of Sheikh Mansour bin Zayed Al Nahyan, the Abu Dhabi billionaire owner, as well as Kia Joorabchian, who acted as a mediator.

The Milan owner and Italian prime minister, Silvio Berlusconi, however, has insisted that the Brazil midfielder is not for sale at any price.

“I know nothing about a Manchester City offer for Kaka,” said Berlusconi, who was not directly involved in the talks. “I think he is not transferable and, given that is the case, he will stay in Milan.”

Kaka’s spokesman Diogo Kotscho insists the player will not be influenced by money and that he will only join City if they can match his ambitions.

“To accept Manchester City, Kaka wouldn’t do a matter based on money”, he told Corriere dello Sport. “But to the competitiveness of the English side.

“Ricky would like a strong side. He would never do something like Robinho, who, just to earn more, contented himself with not a winning solution.”

A complication for City will be tempting Kaka to swap the San Siro for a club currently placed 15th in the Premier League.

Having started his career with Sao Paulo where he scored 58 goals, Kaka moved to Milan for £5m and has scored 86 goals in 244 appearances. He has won 62 caps for Brazil scoring 23 goals and featured in the 2002 World Cup winning squad.

The attacking midfielder has also picked up the Ballon d’Or and Fifa World Player of the Year awards in 2007.