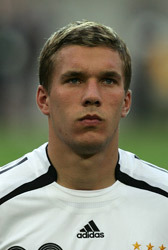 Having signed Brazilian striker Robinho for £32.5million from under the noses of Chelsea, the club have also been linked with moves for Valencia striker David Villa, Manchester United’s Cristiano Ronaldo and Arsenal midfielder Cesc Fabregas.

However, it appears the German forward, is also a target and is currently unhappy at Bayern Munich.

“Everything is possible,” Podolski told the Daily Mirror

“I would be a bad footballer if I contented myself by sitting on the bench. I could tolerate it if it was a case of two or three weeks, but there comes a point when one has to draw the line and say: ‘This is too much! I’m not making any progress here’.”