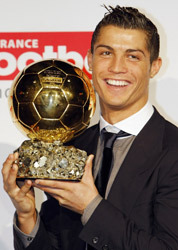 Manchester United have dismissed claims they have agreed to sell winger Cristiano Ronaldo to Real Madrid at the end of the season.

Real director Pedro Trapote reportedly told Spanish newspaper El Mundo a deal had been struck, but added “there are clauses keeping us from announcing it”.

But according to a report from the BBC the news has been greeted with dismay by United officials.

“It’s been strongly dismissed, and with pretty colourful language,” said BBC Manchester’s Steve Wyeth, who is with the United team in Japan for their Fifa World Club Cup campaign.

Trapote, understood to be very close to club president Ramon Calderon, had told El Mundo: “We have already signed our top target for next summer.

“Is it Cristiano Ronaldo? It is Cristiano, there is no-one else. The thing is, it is better not to say anything right now.”

The latest twist in the Real Madrid-Ronaldo story could well sour relations between the clubs following the acrimonious dealings between United and the Spanish giants over the summer.

Real’s very public pursuit of the Portuguese winger ended with United complaining to Fifa over their conduct, with United manager Sir Ferguson claiming they had shown “a lack of morals”.

The case was dismissed because of a lack of evidence, and Ronaldo later claimed that he is “with Manchester in body and soul”.

Ronaldo, this year’s Ballon D’Or winner, is currently contracted at Old Trafford until 2012.